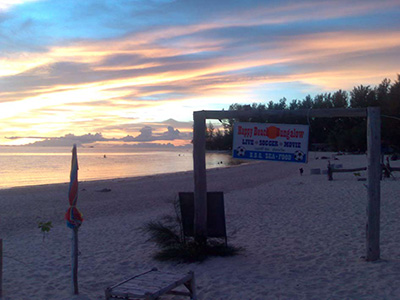 Srithanu covers two peninsulas, a forested area next to Laem Son Lake as well as Srithanu village inland. This small village used to consist of a couple of fruit and veg stalls, a noodle shop and a karaoke bar. The village is now much more happening with several businesses moving in and offering a lot more than fruit, noodles, petrol and karaoke.

As people have moved into the area it is noticeable how people have started using new place names. Two examples of this are Secret Beach (also known as Haad Son) and Happy Beach. This beach is the main beach of Srithanu set in the bay. There are beaches to the north (next to Laem Son Lake also called Zen Beach) and to the south on the peninsula where you can find Loyfa Natural Resort.

So how happy is Happy Beach? Well it has fine white sand and stretches for about 200 metres from the fishing port up to the rocks to the north. Behind the beach is a long stream that flushes into the port which is mostly used for squid fishing. The beach is picturesque with plenty of jungle scenery behind. When the tide comes in it is a pleasant place for a splash around. You can swim in the sea but sometimes that will mean a walk out to the ocean. The coral reef is more than 100 metres off the coast so few go snorkelling off this beach.

There are a few resorts and a bar on the beach. This is The Three Monkeys Bar at the southern end of the beach. It is a funky bar on the beach made of drift wood and assorted bits and pieces in that hippy style. The bar sells beer, wine, spirits and cocktails. They also sometimes have a free BBQ. Very much a reggae, old skool feel to the bar.

Happy Beach Bungalows has both fan and air bungalows. Some of the bungalows are on the beachfront and have excellent views of the sea. The resort has a restaurant and small bar. They serve the usual assortment of Thai and Western dishes as well as BBQ food. The 500 Thai Baht a night bungalows are good value. 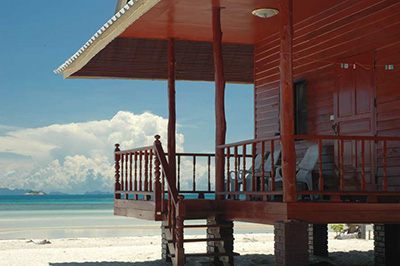 The main criticism on Tripadvisor about Happy Beach Bungalows is one young, male member of the owner’s family who hits on the women and cheats on the bills.

I wonder if Happy Beach Bungalows was one of the first resorts on the beach, and whether it has given its name to the beach (at least in some people’s minds).

Shanti Boutique Hotel in on the northern headland of Happy Beach. It is a small guesthouse with 8 air-con rooms. It is a laid back place often used by people studying yoga in the area just looking for a comfortable air-con room near the facilities of Srithanu village. Room prices start at 1,250 Thai Baht a night. 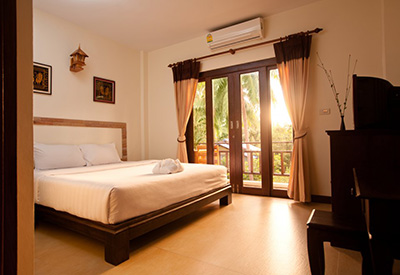 Seaview Rainbow Bungalow is a small family-run traditional bungalow resort. It has beach front bungalows as well as cheaper bungalows behind. They have fan and cold water showers. The resort also has a restaurant. It is next to a bridge leading to Laem Son Lake. Bungalow prices start at 700 Thai Baht. 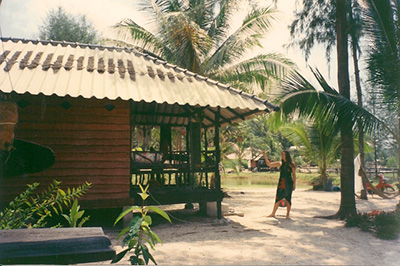 There are a number of 7-11 shops on Koh Phangan. If you visit enough you will notice the slight price differences. The one at Thong Nai Pan Yai is probably the most expensive and the one at the Lomprayah pier in Thongsala is probably the cheapest. The one at Srithanu near Happy Beach is average value for money. They have water, beer, soft drinks, snacks, tobacco and a host of other useful items. For the budget conscious the proximity of a 7-11 can be very important.

The Honey Pot is a small bar on the main road that runs parallel to Happy Beach and on the other side of the estuary. This bar has no facebook page or website. It is one of those ‘notorious’ beer bars where girls play pool, have lady drinks and can be released via a ‘bar fine’. The Honey Pot may test recently made vows of celibacy.

Perhaps the well-being created by many people at any time studying and practising yoga, healthy living and mindfulness has generated a higher than usual happiness quotient in Srithanu. This has found expression in the adoption of a second name for Srithanu beach, namely Happy Beach.