Krabi has been a backdrop in several films. The coastal scenery in Krabi is well worth a visit. It is a pleasant seaside town and a perennial favorite with tourists, offering good value accommodation and facilities.

It takes 8 hours or 8.5 hours to travel from Koh Phangan to Krabi. The journey starts at the Thongsala ports. The Raja Car Ferry offers joint ferry and bus tickets to Phuket. Departure times are 5 am, 8 am and 11 am. If you take the earliest ferry you can be in Krabi 1 pm. It is a very manageable journey that avoids an uncomfortable overnight experience. The cost per ticket is just 590 Thai Baht.

One of the highlights of a visit to Thailand is indubitably Phuket. The beaches are gorgeous, the scenery like a film backdrop, and eye watering prices to match. Yes, Phuket is the most expensive place in Thailand, but it is also a place of stunning natural beauty.

Phuket is located on the west coast of Thailand, just south of Koh Phangan. It doesn’t look far away on a map, but the journey takes 10 hours with the Raja Ferry or 9.5 hours with the Phantip Travel company. Both these options involve a ferry followed by a bus journey. They both drop passengers at Phuket Bus Terminal 2.

The start of the journey in Koh Phangan is Thongsala. Ferries leave at 5 am, 8 am and 11 am.

There are plenty of options for getting from Koh Phangan to Bangkok. Unless you take an airplane, the journey involves overnight travel. The cheap ferry and bus options all start in the morning and get you to Bangkok the following evening.

All departures for Bangkok start in Thongsala. Arrange a taxi the night before.

Lomprayah offer a good value joint ticket using its high speed catamaran and a large bus with air-con and sometimes videos. The journey time is 12 hours.

Seatran has a medium-sized boat. They offer a similar service to Lomprayah but slightly cheaper and slight longer (14 hours).

When all services are available, there is also the train option. A bus takes people to the station in Phun Phin (Suratthani). Second or first class sleeper tickets are available. The train option allows for a better night’s sleep but the train journey really drags as Bangkok approaches. The joint ferry/bus/train ticket is a little more expensive than the ferry+bus option.

Most of the joint tickets drop the passengers at the top of Khao San Road.

Remember to keep your valuables with you and not in your main luggage in the hold. 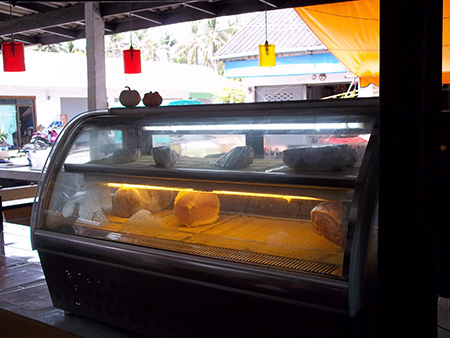 Those who spend a lot of time on Koh Phangan or frequently visit the island used to tell anyone who cared to listen that Koh Phangan was a place that prided itself on being a law unto itself. Throughout the years the central authority in Bangkok has been making decrees affecting the island. And the take up has always been patchy.

The notion is that the Thais (aided and abetted by foreigners), especially Southerners in Thaksin supporting areas, often ignored regulations from the government. Parties need licenses – yeah whatever; bars need to shut at midnight – yeah whatever; the consumption of marijuana must be pro-actively discouraged – yeah whatever.

For years local residents have petitioned the authorities on curbing the proliferation of parties in the Bantai area. They are given lip service; and little more.

So, it might have come as a shock when on 26th January police raided the 63 Bar in Koh Phangan that was holding a party. They arrested 89 foreigners of which 6 were British. 22 Thai were also arrested. Everyone caught were given small fines and suspended prison sentences.

Normally the police raid a bar, and most people slip away via the many exits usually available, with an unlucky couple of foreigners being taken away in handcuffs, and the Thais milling around like butter wouldn’t melt in their mouths. Not this time.

As it stands bars and restaurants are open in Koh Phangan. They have to stop selling alcohol by 24.00. Hotels, gyms, spas and massage parlours are open but operate under Covid safety rules. These rules include wearing masks in certain situations.

The reality on the ground is that Thailand closed its airports to international travellers early on in the pandemic in 2020. These rules have now been eased but visitors are made to provide negative covid-19 tests and to spend 14 days in a quarantine hotel, the costs of which fall upon the traveller. These restrictions have deterred all but the most determined and the most idly rich from visiting Koh Phangan.

The foreigners arrested at 63 Bar will have mostly been long stay residents, probably with some financial stake in the island – such as divers, small business owners etc.

The bars, restaurants, gyms, spas and hotels on the island are desperate for the tourists to return to the island. They are also desperate for the Full Moon Party and all the other parties start up again (they were closed in March 2020). Without the monthly influxes of people, rents and salaries cannot be paid. The huge grey and black markets have been decimated.

Expect as 2021 progresses and more people around the world are vaccinated, and somewhat ignorantly consider themselves safe, the clamour will increase for the removal of the quarantine hotel restriction and the return of the parties (with passing nods to social distancing). People will attempt land crossings, illegal parties and the such like to reignite the good times in one of the world’s most famous good time locations.

Currently UK citizens are not allowed to travel abroad except for work, study or emergency reasons. Ministers have indicated that it is too early to book summer holidays. You would be foolish at this stage (February 2021) to book flights to Thailand and hotels in Thailand.

The Thai government has ordered 63 million doses of coronavirus vaccine, much of them either the AstraZeneca vaccine or the Chinese Sinovac vaccine. The roll out of the vaccination program will be a challenge to the health infrastructure of the country, not least because access to some island and rural communities is problematic, and because many inhabitants of the Kingdom simply go unregistered.

The land of the free, the land of smiles and the land of whatever you want has long been a mecca for libertarians keen to eschew the shackles of laws that don’t fit with their notions of fun. The problem is that now those fun activities are the most likely to spread the virus and cause death, even for the young and supposedly immune.

Well the big news was in September 2018 when the Guardian Newspaper exposed the guru of Agama Yoga to be a sexual predator and to be overseeing a toxic culture. The headline read, ”Under Swami’s spell’: 14 tourists claim sexual assault by guru at Thai yoga retreat”. The swami in question is known as Swami Vivekandanda Saraswati is really the alias for a Romanian national, Narcis Tarcau.

People should have done their homework about first what tantric yoga is and the background of Mr. Tarcau. He was kicked out of India. His guru was another Romanian and another tantric practitioner who claimed he was on a spiritual journey to sleep with 1,000 virgins. This sexual predator went on the run and was briefly arrested in Paris in 2016. His bogus acolyte Narcis Tarcau also went on the run when the Koh Phangan police could no longer ignore the scandal. However, not for long. Coconuts.co reported he is back on the island looking to re-establish his profits and his position to abuse young women by rape and sodomy.

The roots of tantric philosophy stretch back hundreds of years in Hinduism and Buddhism. Agama claimed they were following a Shiva sect from Kashmir. Tantra is the left hand root, the sinister path. William Blake wrote ‘the road of excess leads to the palace of wisdom’. That is at the heart of tantra. Rather than turning away from the pleasures of the senses, the idea is to embrace sensuality and even sin. Naked sadhus in India haunt graveyards, eat meat, sleep with sex workers and drink alcohol. The notion is that they can understand the senses by sating them. You can overcome the sexual desire by learning to ejaculate inwardly.

This type of spiritualism is not for the masses. The West might have tried to de-mystify Hinduism by calling it yoga, but to dabble in Tantric practices is still dangerous.

It is noted that the Agama website is up and running again. They are trying to re-brand and hope enough news cycles will bury the scandal of their sexual predator guru. The money is too good, to let the whole thing drop.

They would be wise to stay clear of cultish trappings like uniforms, spiritual leaders and secret teachings. And instead get back to brightly coloured yoga pants, organic food, and most importantly doing something for the local community. Stop fucking students and start showing love to poor people.