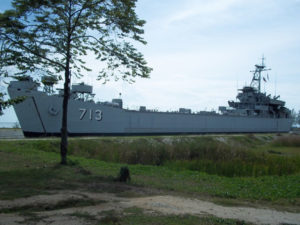 Koh Phangan got its closest thing to a museum in January 2011 when His Majesty’s Ship Koh Phangan was moored in a port berth in Thongsala next to the pier. It is an interesting reminder of Thailand’s previous military involvement as well as an attempt to provide some culture in Koh Phangan not based on hearsay, dance beats and nebulous spiritual pursuits.

The Koh Phangan Royal Ship was given to Thailand in 1957 under the Military Assistance Program. The USA was keen to develop a strong friendship with Thailand which was seen as a bulwark against the spread of communism in South East Asia. The warship was used in operations connected to the American military action in Vietnam.

The war ship was decommissioned in 2009. The ship was donated to the municipal government of Koh Phangan along with a grant to build a permanent dock for the boat. The boat was moored on 2011 at Thongsala

It wasn’t until 2014 that the warship was in place and the museum set up. The museum opened its doors in October 2014 to the general public.

The museum on the boat offers visitors the chance to stand on a Thai navy warship. There are displays explaining the history of the boat. There are also exhibits relating to Koh Phangan.

The ship museum is a great thing in itself but it is also the first real museum on the island. It is a great opportunity for guests to learn more about Thailand. It is also a great starting point in trying to promote a more formal and academic approach to presenting historical information about Koh Phangan.

To find HMS Koh Phangan Museum use the map below or simply go to the main pier in Thongsala and look north. It might be the perfect way to kill a couple of hours before your ferry arrives.